While the nation gears up to choose its next Prime Minister through the Lok Sabha elections that are just around the corner, producer Atul Agnihotri has held up a mirror against the citizens of India in general and politicians in particular in the form of his film O Teri featuring Pulkit Samrat, Bilal Amrohi, Sarah Jane Dias, Anupam Kher, Mandira Bedi and Salman Khan in the title track.
Naturally, the promos of the film which blatantly pointed at a massive scam that was exposed a few years ago caught the attention of political parties and raised their curiosity towards the film. After flooding Agnihotri with phone calls demanding to know details about the film, some went a step ahead and landed at the cinemas to catch the first show on Friday to ensure that the film didn't damage their chances in the polls.
Exhibitor Akshaye Rathi said, “When a leader of the youth wing of a national political party landed up at one of our cinemas with a dozen of his supporters and demanded to watch the film, we were a bit hesitant about giving in. There have been a few unpleasant incidents in the past that resulted in films getting banned or prevented from being released without any hassles at the cinemas.”
But surprisingly for Rathi, when the film came to an end, these guys walked out happy and satisfied, raising slogans against corruption. “What’s interesting is the way this triggered off an impromptu mini rally with others from the audience joining in with the slogans and heading for the streets shouting Vande Mataram in cue with the climax of the film,” adds the surprised exhibitor.
Producer Atul Agnihotri reacted, “Our effort has been to make an entertainer with a relevant message and not to make a statement or target anyone, but it's nice to know that the film evokes a patriotic feeling for viewers.”
at March 29, 2014 No comments:

Sony Entertainment Television’s courtroom drama Adaalat has a new guest this weekend. In tonight’s episode, KD Pathak will be seen sharing space with the talented actor Jackky Bhagnani for the promotion of his upcoming movie Youngistaan. This special episode will revolve around a murder taking place where a woman named Saku Bai is accused for the murder of Shikha. All the evidence go against Sakhu Bai.  MLA Abhimanyu (Jackky Bhagnani) takes up the case and comes to KD to find out on the further investigation.KD finds out that the people around think that Saku bai does black magic and we see black magic paraphernalia present in Shikha’s house and Saku Bai killed her husband as an offering to God. A man named Mangat claims he is Saku Bai’s boyfriend whereas Saku Bai denies knowing him. The confusion adds on when the cops catch her at Mangat’s house with Shikha’s jewellery.
What is this confusion about? Does she really practice black magic? How will KD solve the case now?
To know that tune in to Adaalat Saturday-Sunday at 7.30 PM only on Sony Entertainment Television.
at March 28, 2014 No comments:

FoxStar Studios' Cuckoo has opened strong in its opening weekend making it the highest grossing opening for a Tamil film without a big star cast in the last 5 years.   Co-produced with The Next Big Film, Cuckoo is the  fourth hit for Fox Star in the Tamil market.  Previous hits include Raja Rani, Vathikuchi and Engaeyum Eppothum (US grosses waiting for Dmitry).  Cuckoo is a heartwarming love story between a blind couple.
Director Raju Murugan said, “I am grateful to the fraternity and the audiences for such a warm reception to the film. I could have never imagined this love and affection and such a huge success at the box office, for a film that was being directed by a debutant and did not boast of any big star power. I am thankful to Fox Star Studios and Next Big Films for showing faith in me and in my two powerhouse performers- Dinesh and Malavika, for coming up one of with the most memorable performances of 2014!”
Cuckoo is also Fox Star Studios first film post its very successful three film deal with A R Murugadoss. Murugadoss will be directing a Hindi film for the studio next.
Vijay Singh, CEO Fox Star Studios, adds, “With Cuckoo, we, along with our co producers, The Next Big Film,  have been able to demonstrate that content really is the king at the box office. With Raja Rani and now Cuckoo, we have given the  industry two new talented directors, Atlee and Raju. With four back to back hits under our belt, three of which were in joint production with one of the giants of Tamil cinema, A R Murugadoss, we are now looking forward to some exciting times ahead, as our next Mundasuppati, in partnership with Thirukumaran Entertainment, gets ready for a release soon.”
Next up for Fox Star is it's Hindi release Hawaa Hawaai directed by Amole Gupte (post Stanley Ka Dabba’s criticial and commercial success) slated for a release on May 9th.
Having considerably scaled up in the Hindi film market,  Fox Star recently announced a 4 film deal with Vishesh films (on the back of Raaz 3, Jannat 2 and Murder 3's success) and has forged alliances with Pooja Entertainment and Films Ltd, Phantom Films , Illuminati Films and Endemol India.
Sanford Panitch President of Fox International Productions said, “Fox Star India continues to use its strength in choosing projects, distribution and marketing of both Hollywood and Indian films, and in sustaining lasting partnerships to great results."
at March 27, 2014 No comments:

No limits. No fears. No substitutes.
~Tune in on Sunday, 30th March at 9pm to watch ‘Golden Eye’ only on Sony PIX’
When a deadly satellite weapon system falls into the wrong hands, only Agent 007 can save the world from certain disaster. Armed with his license to kill, Bond races to Russia in search of the stolen access codes for "Goldeneye," an awesome space weapon that can fire a devastating electromagnetic pulse toward Earth. But 007 is up against an enemy who anticipates his every move: a mastermind motivated by years of simmering hatred.

Heroes aren’t born. They are made.
~Tune in on Monday March 31stat 9pm to watch ‘Iron Man 2’ only on Sony Pix~
With the world now aware of his dual life as the armored superhero Iron Man, billionaire inventor Tony Stark faces pressure from the government, the press, and the public to share his technology with the military. Unwilling to let go of his invention, Stark, along with Pepper Potts, and James "Rhodey" Rhodes at his side, must forge new alliances - and confront powerful enemies.

Make your move.
~Tune in on Tuesday, 1stApril at 9pm to watch ‘You got served’ only on Sony PIX’
Elgin and David are best friends and leaders of the best dance crew in the area. When another town's top group challenges them to a battle, David and Elgin, along with their buddies, must create and perfect the most cutting edge moves in order to remain on top. The stakes are raised as friends double-cross each other and true motives are revealed. When the biggest battle comes to town, David and Elgin must work past their differences to prove that they are still the best crew on the streets.

The End Begins.
~Tune in on Wednesday, 2nd April at 9 PM to watch Terminator Salvation only on Sony PIX. ~
Set in post-apocalyptic 2018, John Connor is the man fated to lead the human resistance against Skynet and its army of Terminators. But the future Connor was raised to believe in is altered in part by the appearance of Marcus Wright, a stranger whose last memory is of being on death row. Connor must decide whether Marcus has been sent from the future, or rescued from the past. As Skynet prepares its final onslaught, Connor and Marcus both embark on an odyssey that takes them into the heart of Skynet's operations, where they uncover the terrible secret behind the possible annihilation of mankind.

It’s a knockout.
~Tune in on Thursday, 3rd April at 9pm to watch ‘Rocky Balboa’ only on Sony PIX’
Rocky Balboa, heavyweight champion of the world, is the trainer for Apollo Creed in an exhibition match against Ivan Drago, a "superman" boxer from the Soviet Union. When Apollo is killed in the ring by the brutal Drago, Balboa blames himself and promises to avenge his friend's death in the ring.

Inspired by a true story.
~Tune in on Friday, 4thApril at 9pm to watch ‘Pursuit of Happyness’ only on Sony PIX’
Gardner has invested heavily in a device known as a "Bone Density scanner". He feels like he has made these devices. However, they do not sell as they are marginally better than the current technology at a much higher price. As Gardner tries to figure out how to sell them, his wife leaves him, he loses his house, his bank account, and credit cards. Forced to live out in the streets with his son, Gardner is now desperate to find a steady job; he takes on a job as a stockbroker, but before he can receive pay, he needs to go through 6 months of training, and to sell his devices.

Feel good film of the decade.
~Tune in on Saturday, 5thApril at 9pm to watch ‘Slumdog Millionaire’ only on Sony PIX’
A Mumbai teen who grew up in the slums, becomes a contestant on the Indian version of "Who Wants To Be A Millionaire?" He is arrested under suspicion of cheating, and while being interrogated, events from his life history are shown which explain why he knows the answers.

Music and trailer launch of O Pushpa I hate tears

The trailer and music launch of upcoming film O Pushpa I hate tears had been launched.The event was attended by the cast Krushna Abhi... 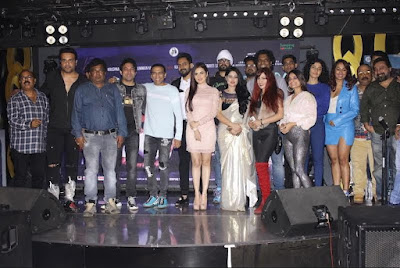