BRING IN THE NEW YEAR WITH TELEVISIONS MOST LOVED FAMILY DRAMA OF ALL TIMES: PARENTHOOD SEASON 6 DEBUTS IN INDIA ON STAR WORLD PREMIERE HD ON 1ST JANUARY.

Star World Premiere HD presents the sixth season of the critically acclaimed drama “Parenthood". Entering its last season, the show follow the trials and tribulations of the very large, colorful and imperfect Braverman family.
Parenthood is an American television drama series developed by Jason Katims and produced by Imagine Television and Universal Television for NBC. The show tells of the Braverman clan which consists of an older couple, their four children and their families. One of the grandchildren depicted has Asperger syndrome which has gained attention throughout the press.
Loosely based on the 1989 film of the same title, The series is set in Berkeley, California on the east shore of the San Francisco Bay area, but is filmed primarily in Los Angeles. The show revolves around the Braverman family covering three generations. It features patriarch Zeek Braverman and matriarch Camille Braverman, and the families of their four children Adam, Sarah, Crosby, and Julia. Adam is married to Kristina and has three children – Haddie, Max, and Nora. Sarah is divorced and has two children – Amber and Drew. Crosby marries Jasmine in season 3 and has two children – Jabbar and Aida. Julia is married to Joel and has two children – Sydney and their adopted son Victor.
Watch Parenthood Season 6, Starting 1st Jan, Every Thursday at 11pm only on Star World Premiere HD
at December 31, 2014 No comments:

Sony Entertainment Television’s show Itti Si Khushi is all set to bid farewell to its audience on 2nd January, 2015. Emphasizing on its concept of wohi sachcha hai, jiske dil mein bachchca hai, the show saw Anuj Sachdeva and Smriti Kalra essay the roles of lead protagonists, Aman and Neha respectively. Revisiting the love and innocence of being a child, Itti Si Khushi explored Neha’s journey who meets with a near death accident at the age of 14 and slips into coma for 12 years. She wakes up as a beautiful 26 year old, only to find out she has missed out on several important years of her life. The ups and downs of her life, from attending school to marrying her childhood love Aman, were beautifully portrayed in the show. As the show comes to end, the cute love story will definitely be missed by the fans!
at December 31, 2014 No comments:

Arzoo’s life in danger in Humsafars

Sony Entertainment Television is known to portray shows which are close to reality  and Humsafars proves that point. Arzoo’s life has been turbulent with both the brothers jostling for her attention, however, she gets into a spot of trouble when she lands in the wrong place at the wrong time. Heartbroken after knowing Sahir’s truth, she hails a cab to go to Borivali. Unfortunately for her, the cab driver has evil on his mind and stops the car in one secluded location. He tries to force himself on her and molest her modesty. Arzoo fights back to save herself and in the process accidently dials Sahir’s number. Sahir rushes out to save her.
at December 31, 2014 No comments:

That Sharad Malhotra and Divyanka Tripathi are a couple is not a hidden fact anymore. So it’s natural that both of them will stand by each other no matter what. One got to see a glimpse of this during Sony Entertainment Television’s ongoing show Box Cricket League. During one of the matches between Kolkata Babumoshayas and Delhi Dragons, Ssharad Malhotra the captain of the Kolkata team was missing from the match. But his girlfriend Divyanka ensured that she made up for his absence. The pretty actress who is usually very calm and quiet was at her fun best. She was seen enthusiastically cheering and applauding for her team. She danced, hooted and encouraged the team throughout the match. It was definitely a pleasant change to see her in this fun mode. Way to go girl!
at December 31, 2014 No comments:

Leg pulling, teasing and trying to instigate team players is something that happens between two teams during any game. And Sony Entertainment Television’s Box Cricket League is no different. In fact during a match between Kolkata Babumshays and Delhi Dragons, the Kolkata team kept teasing the Delhi team by calling them funny names and singing slogans. On one hand where they referred to Ritvik Dhanjani as Emraan Hashmi, Aadesh Chaudhary was called Raavan. Not just that, they even made fun of Karan Wahi by singing ‘Wahi ki jawani, ho gayi purani’. But despite of all this, the Delhi team remained unaffected and maintained their cool. That’s the spirit, guys!
at December 31, 2014 No comments:

Newbie actress Arjumman Mughal is on cloud nine. Recently, she bagged the 'Shaurya Award for Bravery and Excellence' for her role as the female lead in Ya Rab.
Arjumman, who starred opposite Bigg Boss-fame Ajaz Khan in the acclaimed movie, accepted the award decked in a dazzling white flowing dress studded with silver embroidery with silver earrings to match.
The award ceremony presented by Aviral Group was attended by political leaders and bureaucrats. "This award brings pride and honour. I wasn't chosen only for my acting credentials, but also for courage in accepting such a sensitive role," she said.
Now, that's an interesting take! But one wonders, what's so courageous about accepting to play a character? In case you haven't seen the film yet, let us tell you that Ya Rab has been highly praised for its sheer audacity to show how the religion of Islam has been used by some unscrupulous elements, as a tool to propagate violence and terrorism.
Inspite of moderate success at the box-office, the film received rave reviews for focusing on a very delicate issue about a few self-proclaimed Maulanas (Islamic preachers) misinterpreting The Quran and its real meaning. It was hailed as a genuine effort to showcase the correct face of Islam and help bring misguided youth back to the right path.
Being a Muslim herself, Arjumman boldly essayed the character of Amreen who is related to a scheming and corrupt Maulana. She gracefully played a pregnant girl who is the only witness to a bombing.
at December 31, 2014 No comments:

Email ThisBlogThis!Share to TwitterShare to FacebookShare to Pinterest
Labels: Awards

There’s a lot happening on the ongoing sports reality show Box Cricket League on Sony Entertainment Television. While some players are playing in the spirit of the game, some are resorting to all kinds of methods to instigate the opposite team. And that’s exactly what the Kolkata Babumoshayas team did with Delhi Dragons during a match. The team constantly kept passing comments at the players on field. In fact, when Karan Wahi from the Delhi team was batting, Salil Acharya kept on passing comments to pressurize him so that he would get bowled. However, Karan kept his calm and continued playing. Not only this, throughout the match Karan was not only calm himself but was even seen pacifying other players who lost their cool. That’s the way, boy!
at December 31, 2014 No comments:

In a bid to win the game, all the teams on Sony Entertainment Television’s Box Cricket League have come up with their own strategies and game plans. And during one of the matches an absolutely surprising event took place. In a match between Jaipur Raj Joshilay and Chandigarh Cubs, the captain of Jaipur’s team was changed from Rajiv Thakur to Karan Patel. This shocked everyone present there as no one knew the reason for the same. Well was it the team owner Kamya Panjabi’s favouritism towards Karan (Ahem! Ahem!) or something else, well only Kamya can tell!
at December 30, 2014 No comments:

Imam Siddiqui has always been controversy’s favourite child. He is seen rubbing a lot of people the wrong way with his attitude and comments. This time at the receiving end was none other than BCL’s Jaipur Raj Joshiley team. During the match between Jaipur Raj Joshiley and Chandigarh  Cubs, Imam came as the lucky mascot for the Chandigarh team. However, the lucky mascot proved to be quite a nuisance as he sat in the commentator’s box and picked up on the opposite team’s members. Right from Karan Patel and Kamya Panjabi to Ali Gony and Ankita Sharma everyone was irritated by him. In fact, things went so out of control that the Jaipur team threatened to leave the stadium if Imam did not leave. All this makes us wonder to what extent the publicity hungry Imam Siddiqui can go?
at December 30, 2014 No comments:

What Made Barkha Bisht Cry?

Box Cricket League on Sony Entertainment Television sees all the television actors putting in their heart and soul into the game to emerge victorious. So much so that some of the players have even ended up shedding tears when they lost the game. And that’s exactly what happened during the match between Chandigarh Cubs and Jaipur Raj Joshiley. Barkha Bisht Sengupta, the team captain of Chandigarh Cubs, was seen crying when her team was losing back to back wickets against Jaipur Raj Joshiley. The actress was inconsolable and turned towards her husband for support. Even when her team tried to calm her down, she did not stop sobbing. Come on Barkha, better luck next time!
at December 30, 2014 No comments: 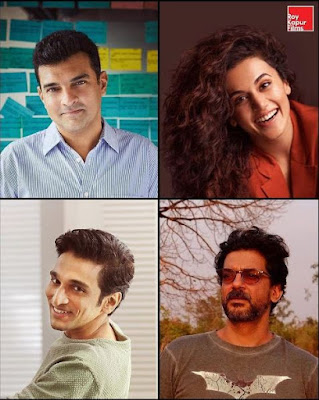