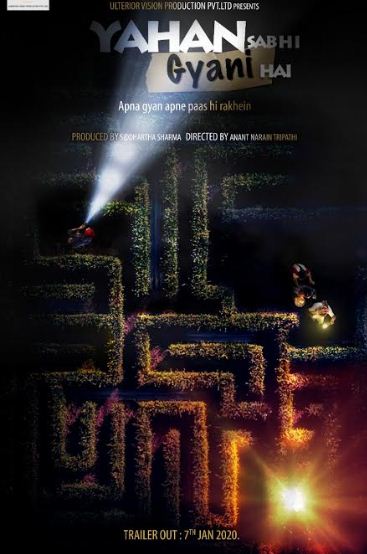 Under the banner of Ulterior Vision Productions Pvt.ltd in association with the future films.The film is produced by Siddhartha Sharma and co-produced by Jyoti Sharma. Anant Narain Tripathi has directed as well as given the story and dialogue in the film. He is also involved in the screenplay along with Jyoti Sharma.

The film edited by Rajesh Pandey and Shirish Desai is the cinematographer of the film.Sadhu Tiwari has given the music and he is the singer as well.Rohit Sharma is the lyricist and Nishant Salil has given the background score. The film is starring very popular face Neeraj Sood, Atul Srivatsav and Apoorva Arora who are quite famous for their versatile characters and acting. They are seen sharing the screen with big-wigs like Salman Khan, Akshay Kumar and Ayushmann Khurana.The other stars are Vineet Kumar, Meena Naithani, Gulista, Radhey Shyam Dixit, Manju Gupta and Shashi Ranjan will be seen in important roles.
Pappu Tiwari and his dysfunctional family have got by comfortably till now by selling his properties. Now, with only one ancestral property remaining and a financial crunch lingering on his head, Pappu is thinking of selling this ancestral land for a best possible price. But since this thought popped in his head, his late mother has started haunting him in his dreams. Unable to find a connection, one day on a visit to his family Pandit jib, Pappu is told that he has a yog of hidden treasure in his horoscope. Now realizing what his late mother ‘Amma ji’ was trying to communicate to him, the whole family is ecstatic on the news. Lured by the prospects of becoming a millionaire, Pappu rejects all the offers he was getting for the property. To add to the good times, Pandit Ji brings a marriage proposition for his daughter Goldie with Kani’s son (Rakesh). Kani is the new richy-rich of the city, who has recently turned to politics. Kani throws Pappu’s life in a tizzy by dropping the dowry bomb. Pappu agrees to everything, as he believes his sacrifices will be returned when it is his turn to demand a dowry for his son. An unfortunate incident leads Pappu and Family to believe that Amma ji’s spirit has possessed Goldie in order to help them out find the hidden treasure in the ancestral property. With the date of marriage approaching, creditors lining up, real estate price going down and no hint of hidden treasure to fulfill the dowry demand, the eccentric family in this hour of adversity get the true lesson of life as to what is the ultimate treasure they always had but never realized.

The shooting of the film is completed at various  location of Kanpur, Uttar Pradesh and Mumbai .The film will hit the theatre On 31st January, 2020.

The makers of 'Sonu ke Titu ki Sweety’ are back with another laugh riot ‘Jai Mummy Di’ and the Twitterati can’t stop talking about it. From back to back punch lines to foot-tapping music, everything in the film has triggered excitement in audience, and Singer Shilpa Surroch is overwhelmed with the response.

Surroch, who has sung “Ishq Da Band” alongside the hit maker Mika Singh, in ‘Jai Mummy Di’ , is happy that people are loving her voice as much as Mika’s. Talking about the same she says, “Mika has a very distinctive voice. Even though both of us have powerful vocals, our voices compliment each other, and that’s a relief to know.”

It was interesting to know how Shilpa Surroch came on board for the Luv Film’s project as a scratch singer and later went on to record the full song. Throwing light on how it all happened, Shilpa states, “I was called to sing the rough track for music composer Gaurav Chatterji. I recorded the song, went back and forgot about it. Later, I got to know that makers have finalized my voice for the trailer.”

The trailer, as well as Shilpa’s voice, received rave reviews from the audience and that’s when the makers decided to retain her and record full song with Surroch. “They wanted a popular singer to record the song but after looking at people’s response, makers were a bit confused. Gaurav suggested them to retain me as the singer for the main track and release it in the film. That’s how I came on board.”

Shilpa believes that support from fellow professionals give you confidence. “Every artist craves for a supportive work environment besides the fan’s love. I am thankful to Gaurav for having faith in my talent,” she signs off. 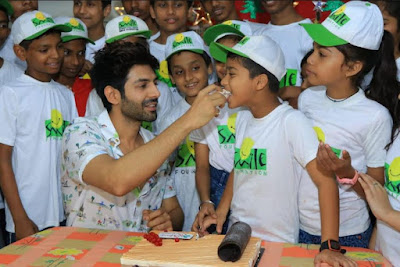 Kartik Aaryan is on a high this year with two films Luka Chuppi and Pati Patni Aur Woh which have literally set the box office clanging has decided to end the year with a whole lot of celebrations and joy.

The actor brought some cheer into the lives of little children at an NGO Shed Organizayion supported by Smile Foundation. Kartik decided to turn Santa for these children and spread happiness. He cut their favourite cake, sang songs for them and later even distributed some gifts for them. Aaryan even performed to his chartbuster track Dheeme Dheeme with the kids and did his signature hook steps.

The children were excited with their favrouite star’s presence and the actor humbly bringing out the child in him amidst them. Kartik Aaryan says “It was so much fun celebrating this festival of joy with these little ones. I'm really touched with the amount of love and affection I got from them. Spending time with these kids, singing and dancing with them brought the child out of me. I'm so glad that I ended this year on such a good note.”

Christmas Celebration on the sets of Indian Idol season 11 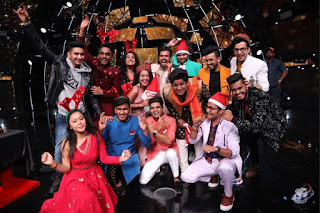 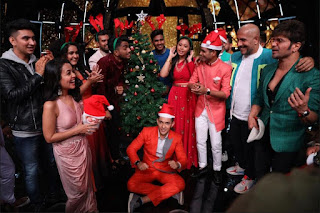 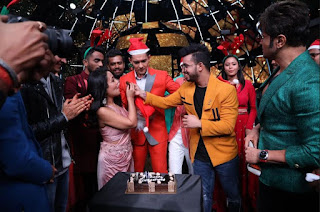 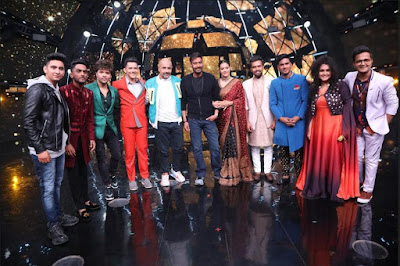 Indian Idol season 11 has been in limelight because of its brilliant contestants and their melodious voices. Not to forget to mention about the show’s  fabulous  judging  panel which includes Neha Kakkar ,Vishal Dadlani and Himesh Reshammiya. To support our Top 7 we had the superhit Jodi of Ajay Devgana and Kajol to promote their upcoming movie Tanhaji .

Rishabh Chaturvedi the Rockstar of Indian Idol performed on the songs “ Tune muje pehchana nahi and Suraj Hua Maddham” . His performance enthralled everyone from the judges to the special guests Ajay and Kajol . When Ajay Devgn asked Rishabh what is the story behind his mehndi, Rishabh told him that he is a huge fan of Alia Bhatt and has put mehandi of her name. He also told he has a written a song for Alia which Vishal Dadlani made Alia listen to and she also loved the song. Ajay told Vishal to make Rishabh sing in front of Alia and then see what is her reaction to it.

Kajol who is the queen of Romance said “ Singing romantic songs is very difficult because you have to have softness and correct expressions for these kind of songs and I must say you have all the qualities to become a great romantic singer”.

Himesh Reshammiya while appreciating Rishabh said “ The way you sang today was enchanting. Both the songs you sang are legendary ones and singing them with so much grace is brilliant.”

Stay tuned and watch Indian idol season 11 every Saturday and Sunday  at 8Pm only on Sony Entertainment Television. 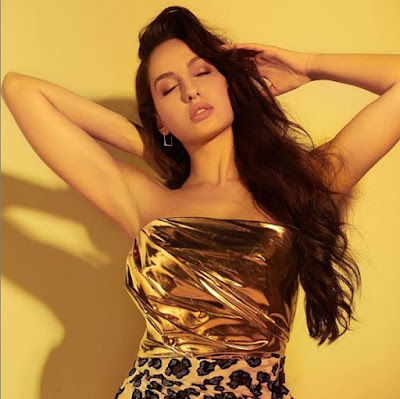 Versatile actress Nora Fatehi is very excited about her upcoming film Street Dancer 3D being directed by Remo D’Souza.  The film is not just about dance but the look of the stars also plays an important part in the film.

Nora’s look will essentially be the talking point in the film as it has been specially designed keeping in mind the character she plays.

Since Nora plays a dancer, her character in Street Dancer 3D is shown as someone who is very  strong and confident. And her look has been designed in such a way that it resonates with her character's swag and attitude. 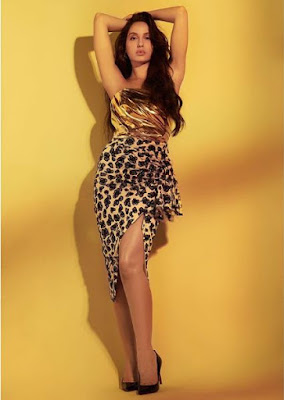 Nora plays an young Indian girl brought up in London and how she brings in a poise and  energy into the film with the character.  She  plays a very sporty and bold girl, who has an air of assurance. She has a sassy vibe throughout the film, which is further enhanced by the cool red hair-do that she sports in the film.

Since the film is her dream come true, Nora has worked hard on her character and  how she looks in the film.  She has literally sat down with the  designers and given her inputs when it came to the looks and the clothes, her hair and the kind of accessories she will be using for her character in the film.